Coca-Cola Azerbaijan has won the 2020 U.S. Secretary of State’s Award for Corporate Excellence (ACE) for its work promoting women’s economic empowerment. The Secretary’s annual Award for Corporate Excellence (ACE) is one of the U.S. Department of State’s most prestigious international awards, given to three U.S. companies that uphold high standards as responsible members of their communities and represent American values in the way they do business in their overseas operations. Coca-Cola won the “women’s economic empowerment” category of the ACE Award, as announced in December 2020 by Keith Krach, U.S. Under Secretary of State for Economic Growth, Energy and the Environment.

“I am pleased to congratulate Coca-Cola for their great work empowering women in Azerbaijan. We commend the valuable work that Coca-Cola has done in Azerbaijan to support rural women in their pursuit of new knowledge and skills to improve their economic well-being. We are also delighted to see Coca-Cola Azerbaijan lead by example through promoting a gender balance among their employees, especially at the management level. This is a perfect demonstration of how American companies uphold high standards of doing business overseas while actively improving the well-being of the communities in which they operate,” said U.S. Ambassador to Azerbaijan Lee Litzenberger.

Coca-Cola was recognized for its extensive efforts to promote women’s economic empowerment in Azerbaijan, which it carried out primarily through   a public-private partnership with UNDP Azerbaijan, the Azerbaijani State Committee on Family, Women and Children’s Affairs, Youth Inc., and the ASAN Volunteers NGO. Since 2014, Coca-Cola's women’s empowerment projects have benefited over 5,000 women in Azerbaijan. These projects included the establishment of Women’s Resource Centers in the Salyan and Neftchala regions, a “Successful Women, Successful Future” project that helped women establish successful businesses in Azerbaijan’s tourism sector, and a “Youth Inc.” program that supported young women through entrepreneurship capacity-building courses.

“We are very proud to receive the U.S. Secretary of State’s Corporate Excellence Award for our efforts to promote women’s economic empowerment in Azerbaijan. Coca-Cola believes that the growth of businesses must go hand-in-hand with the improvement of communities. For us, supporting women inherently means supporting our communities. We thank the U.S. Department of State for recognizing our achievements in this regard, and we thank all our partners for their valuable contribution to our noble mission of empowering women,” said Rena Mammadova, General Manager of Azerbaijan Coca-Cola Bottlers.

The U.S. Secretary of State’s annual Award for Corporate Excellence recognizes three U.S. companies around the globe for their work representing American business values overseas through their engagement with local communities. The selection of Coca-Cola Azerbaijan for the 2020 ACE Award for women’s economic empowerment is the first time that an Azerbaijan-based U.S. company has received the honor.  This year’s other two winners were Abbott for their work expanding access to health care in Rwanda, and AES Panama for their achievements in sustainable energy security. 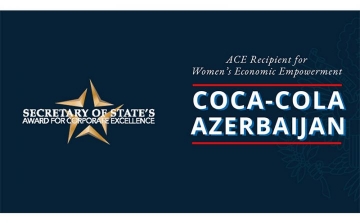